They are all prominent examples of our tendency to push minorities into leadership positions in times of crisis. This phenomenon, known as the “Glass Cliff,” is real. Companies typically put women and minorities in the CEO job in times of poor performance, according to reviews of CEO changes over the past 15 years.

Glass Cliff is the phenomenon of women in leadership roles, such as executives in the corporate world and female political election candidates, being likelier than men to achieve leadership roles during periods of crisis or downturn, when the chance of failure is highest.

And people who fit the “traditional” look of a CEO might just not want to take on the role when they know the company is in trouble.

Many clearly and exceptionally capable women are promoted to CEO right before the crisis hits. Often because the board members want to signal a dramatic change and lessen the critics towards the negative situation.

Stereotypes also play a huge role: Women may be perceived as better able to humbly rally the troops and apologize publicly for a company’s failings.

The result is that a company might announce an “historic first” appointment at the same time that they’re really setting up that person to fail. It also means the company could be making poor use of a leader who is exceptionally qualified. 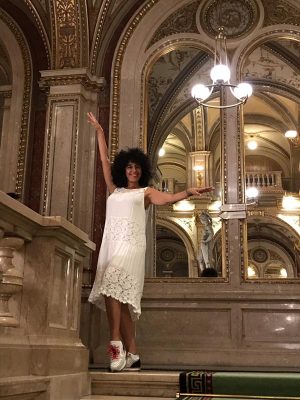 To rise to the top, women and minorities have to be “flawless” and overcome bias — both subtle and not — at almost every moment in their career.

As a reward, they get their dream job at just about the worst possible time…

So CEO goddesses & minorities: you need to DANCE and push away all the invisible barriers and dangers such as Glass Cliff which involves exposure to risk of falling but which is not readily apparent.

Dance the “I am on Top of the World”… Kick with your hip on the edge of the ‘Glass Cliff’, and say loudly “Proud to be a Woman!”