Unforgettable: Divine Dance in a Church in… Istanbul!

This year I celebrated the International Women’s day in Istanbul where I gave a lecture, with the Divine 9 dance, about FeMale Leadership in an old Chapel from the 16th century! Unforgettable experience!

When I entered the space, I felt overwhelmed by emotions, sad and happy ones.

The first emotions were full with the low vibrations of sadness and grief. Once upon time, long time ago, this Divine Dance was practiced in temples to honour the Divine Feminine in every woman, and every man. That was about 4000 years ago, when the society was matriarchal with an egalitarian system between women and men.

When our civilization moved from matriarchy to patriarchy, these dances were banned from temples and confined to… brothels. So, I felt first the sadness and the pain of excluding this ancient female dance from the sacred space to confine it to the pornified space.

Then followed emotions of pride, joy and gratitude. Proud to be women, proud to be feminine, proud to practice this Divine Dance in a chapel/church. I felt deep gratitude to re-write history, to change the narratives, and to bring this feminine Divine Dance back home where it belongs: the sacred space 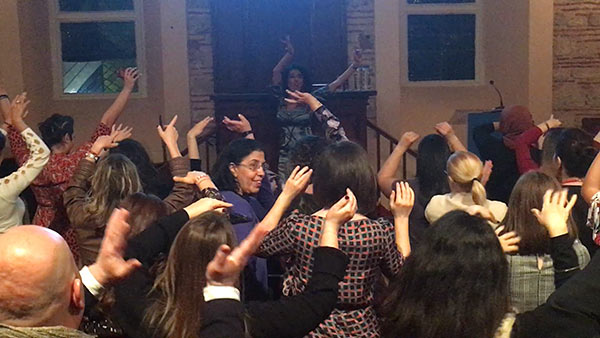 And while swinging with my audience in a Christian chapel, in Istanbul, in a Muslim country turning from progressive to conservative, I made a prayer.

I prayed that one day, in my life time, the Muslim religious institutions will open their sacred space for the feminine and that I will lead my Divine dance in a mosque!

In meanwhile, let’s dream, pray and act so that our political, economic and religious institutions, everywhere in the world, open the space to the FeMale Leadership to rise and shine.

And ladies and gentlemen, let’s start now by dancing in any religious-sacred space we enter. Bring the feminine back to the religious institutions whether a chapel, a church, a temple, a synagogue, a mosque, or any other worshipping space.

Dance and worship the feminine, in every woman and in every man. Do it in your own unique way! 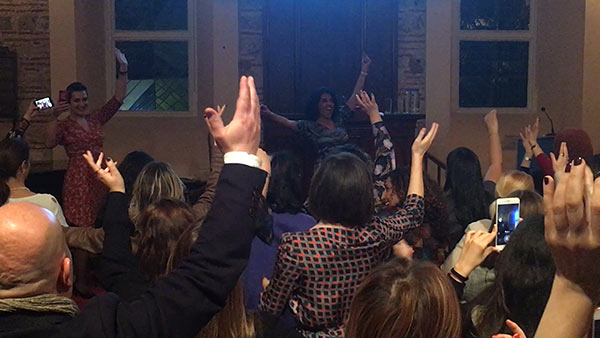 4 thoughts on “Unforgettable: Divine Dance in a Church in… Istanbul!”