We all need an Arab Sex Lamp!

Greetings from Tunisia. I send you here a little film I took in this beautiful museum, an old Arab house. The subject of the film is an old Arab Sex Lamp (300 years old!!), to protect women’s sexual right to pleasure! To make sure that women reach orgasm and that making love lasts for hours, that a man doesn’t come before a woman has had several orgasms!! Arab Muslim culture, to the surprise of many, has a long tradition in Slow Sex and female sexual pleasure. 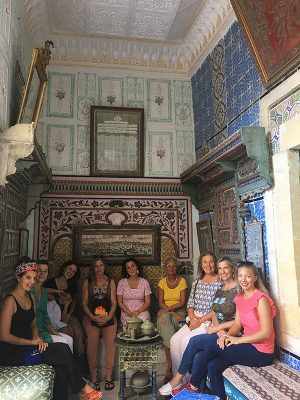 I am here in my home city Sousse in Tunisia with an amazing group of women who participated at my Divine9Dance retreat. The youngest lady was 4 years old, you see her next to me in the film (she came with her mum and grand-mum!!), the oldest was 67+ years old. A great mix of generations, nationalities, cultures…

I took my ladies to this museum, a beautiful old Arab house from the 17th century. I showed them here the Arab ‘sex lamp’ burning with perfumed oil in one of the bedrooms. The lamp burns out for hours, and only when the lamp snuffs out is the man allowed to have an orgasm.

I grew up in such a house, with my grandmother bringing us to bed with the tales of 1001Night. Western children grew up with Snow-White laying in her glass coffin waiting to be awakened by the kiss of the prince on the white horse. Boooooooring!

I was brought up as an Arab-Muslim girl with the fairy tales’ of 1001 night where women would make love with different kind of men the whole night, eating, dancing, kissing, climaxing, resting, and starting all over again, from sunset until sunrise, until the light of the oil lamp fades away…

In the Muslim theology, men are not allowed to have an orgasm before the woman has had at least one. Period. Female pleasure and orgasm are protected, by the culture and by the Muslim jurisprudence.

According to recent research 40% of heterosexual women report having difficulty or an inability to reach orgasm. The first cause is stress and body shame, then comes the way men pleasure women in bed.

However, they had orgasms at home during lovemaking in their private lives. What aroused them and lead them to orgasm was lots of kissing, cuddling, sensual whole-body massage, clitoris stimulation and most of all a SLOW pace.

PS. Leave me your comments below. I love reading you!

PSS. Stay tuned, my new online education Divine9Dance Training will be very soon released! Inscribe now if you want to be the first one to receive the ‘Special Divine Offer’!
* Inscribe here *

2 thoughts on “We all need an Arab Sex Lamp!”