I was triggered by that provocative interview with Fay Weldon in Belgian magazine HUMO the other day (it also appeared in De Volkskrant)… Obviously, there are two parts to her reputation: first that she is a feminist writer of the most brilliant kind, and second that she is a very funny one. And now she’s in the news because of her new book (Death of a She Devil) and some interview quotes; we learn she dislikes the #MeToo campaign and that she feels too many young women flirt with feeling a victim. Hurrah, me too! 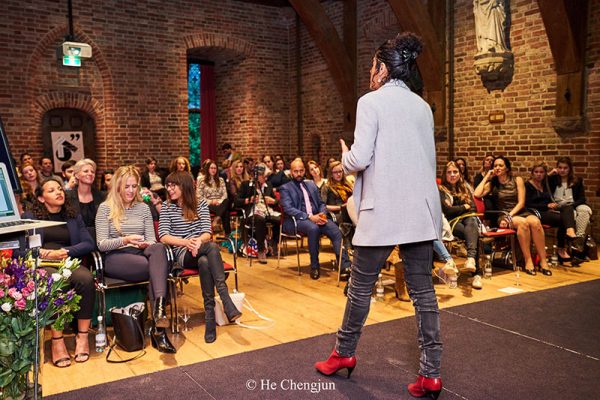 As revelations about the sexual abuse by Hollywood mogul Harvey Weinstein and those in countries closer around us, including in our own capital of Amsterdam and the TV-capital of Hilversum, continue to surface, I’ve found myself reflecting not only on how common abuse in the workplace still is, but how it found its stage in the world of media. The more the spotlights are already in place, the more perverse in its acts, expressions and reactions? I observe it as the scholar in Gender & Media I’ve always been. (A bit of decency, please, why all this exhibitionism!)

Do not suspect me of snobbish showing off literacy, but I had to think of one of Shakespeare’s most frequently quoted passages:
‘All the world’s a stage,
And all the men and women merely players;
They have their exits and their entrances,
And one man in his time plays many parts,
His acts being seven ages. At first, the infant…’

I don’t need to repeat all, but it continuous with the unmasking of..:
‘… the schoolboy…
then the lover…
then the soldier….
then the bubble reputation….
Then the justice…
For his shrunk shank…
Sans teeth, sans taste, sans everything.’

You probably get the picture… Hilarious, no?! (And note this ‘seven ages‘: as in the seven sins…)

The thing is, also 400 years after Shakespeare’s theatre company, despite feminism, back stage nothing has changed, really: Sexual harassment is still a pest and so many men remain caricatures of themselves. Worse perhaps, as that stage now has become the world (full of role models) by influence of the ruling media – and while all contextual surroundings only play a role in the alleged suspect’s defense sideshow and basically does not get much attention by the main media.

My reason for discomfort, or worries, and I assume equally Mrs. Weldon’s, is the more MeToo J’accuse hashtag messages are posted, the more it renews the battle of the sexes. That should be over by now, that could be over by now as women nowadays have so many other ways to act and address their abusers.

It turns out again to an out-loud cry of women stating they require ‘special treatment and protection’. I hate that because that cry is over the top as there are so many other ways women can act besides posting an ethereal float of shallow hashtags.

And for the rest I would like to point out that men whose sexual desires are out of control also prey on men; and it can happen, too, that women in positions of power will take advantage of men.

For all counts the same; the real solution lies within the opportunity where women can address abusers and their behaviour on the spot and directly and effectively – and in always keep the discussion going, a real discussion.

PS. I would love to read your comments so leave them below or send me an email info@kaouthar.com. And remember to share this with the special ones in your life because Sharing is Caring…