I realized I was about to be raped

Cologne, Germany 31st December 2015. For the ones who missed it: hundreds of women on the main square in Cologne were sexually harassed by hundreds of Arab-North African men (?) at the new years’eve.

For many women (and men), this is overwhelming news. I am unfortunately used to this type of behavior in many countries. 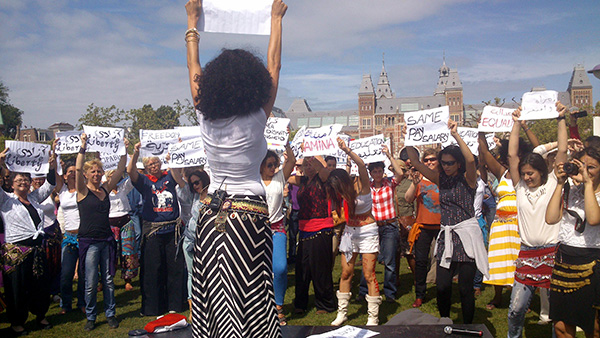 In Tunisia, I grew up as a little girl with a clear message about a small group of ‘rural men’ coming to big cities: they are uneducated, poor and think that all city girls are whores and can be ‘taken’. They are frustrated because they have no job and no sex and they become aggressive and dangerous when they are under the influence of alcohol or drugs.

In Tunisia women enjoy(ed) lots of freedom and protection. Most of men are respectful. But you have that disfunctional male minority. You would walk as a woman in busy streets and feel hands touching your body, pinching your buts… Hands without faces, and when you turn around, you encounter few pairs of male eyes full of agressivity and lust gazing at you with a libidinous expression on their faces. Disgusting. And pathetic. In Cologne, there was hundreds of them all at once. Must be very scary.

Tunisia is seen as the most progressive and safe Arab-Muslim country for women. Despite the fact that women in Tunisia enjoyed more freedom and rights than else where in the Middle East, I wanted, as a woman, total and unconditional freedom. And this is why I moved to the West. I thought: men are emancipated in the West, they respect women, as a a woman you are free to dress as you wish without having to ‘fear the consequences’. In the West I was safe as a woman.

Very soon I realized that this was an illusion and that walking alone the streets of Paris by night was often more unsafe than the streets of Tunis. Late at night, streets were made unsafe by aggressive drunk men. I felt so desperate: I moved to Europe to get rid of this kind of male behavior and here they purchase me in Europe! Where Shall I go? On planet Mars?

The biggest disillusion came when I went on vacation to Scandinavia. I was very curious to discover this part of the world. From my gender studies I understood that women rights are a serious topic there and that women enjoy more rights and freedom than elsewhere.

I made a whole tour starting with Copenhagen, then Stockholm and Helsinki. In Helsinki I had as guide a very nice young man, an acquaintance of a friend. This Finnish young man was great: respectful, intelligent, intellectual, soft, a real gentleman. He showed me around and introduced me to his culture. We went out in the evening and he took me to a hip nightclub in Helsinki. We were dancing and enjoying ourselves. He started drinking vodka, I drank orange juice. I am not that much fond of alcohol (advantage/disadvantage of growing up in a Muslim culture).

Around 1:00am I went with him outside because he wanted to smoke. We walked around the nightclub. It was cold. We were talking and he said he found me attractive. I politely thanked him. Before I realized he pushed me on the wall and started kissing me. I tried to push him and he became wilder and grabbed my breasts. It went very fast; before I realized he threw me on the floor, was on top of me, lifting my skirt, tearing my stocking and his hand trying to find its way between my legs, his tong licking my face and his short and fast breath smelling vodka. It was horrible. Until nowadays I feel nausea every time I smell vodka. I started to scream but nobody came.

So I changed my strategy, I stopped fighting and I relaxed my body, he thought that I finally ‘gave in’ and became consenting. He started opening his pants and taking his penis out. In that moment I realized I was about to be raped and that I must do something before it’s too late. So with all the forces I had, with all the fear and despair running in my body, I kicked him with my knees in his balls, pushed him and run away. I was lucky he was too drunk to run after me.

That experience taught me that bestiality and sexual harassment towards women is unfortunately not an Arab-Muslim exclusivity. In Helsinki my guard was down because I thought I was safe: I was not with ‘barbarian’ Arab-Muslim men, I was not in a ‘primitive’ Arab-Muslim country; I was in civilized and enlightened Europe. I even was in the most progressive part of Europe, Scandinavia, where the men are emancipated and respectful towards women. I thought I was safe in that part of the world. I lowered my guard and was almost raped, by an emancipated, highly educated Scandinavian gentleman who turned into a beast when he was drunk. Cologne, Helsinki, Mexico, Peru, Stockholm, London, Cairo, Tripoli… Fucked up men harassing women are everywhere, no matter what the ethnicity or religion is…

Will that ever change? Yes. But we can only change it together, women AND men, East and West. The radical feminist strategy of putting men in the aggressor position and women into the victim one did not erase this patriarchal epidemic. Blaming continuously the men even less. After all these men have been once little boys and they were, also, raised by women. So what kind of values did the women, starting with their mothers, transmit to them? What did their mothers and fathers tell, or not tell them about respecting women’s sexual boundaries? The men’s dysfunctional behavior is a result of their education and it’s unfair to dump the responsibility only on men. Women are also supporting the patriarchal system, actively and passively.

The challenge today is how to help women become assertive and alert to protect their sexual boundaries without becoming afraid from or aggressive towards all (Arab-North-African-Muslim) men? How to teach men to respect women’s freedom and sexuality without putting them automatically into the rapist aggressor corner? How to address the problem of pornification in the (western) media that make men think that women are always horny and willing to have sex? How to deal with the excessive use of alcohol and drugs in the nightlife, that makes many men loose their self-control and become aggressors? How to awaken the values of sisterhood and solidarity amongst women so that they protect and support each other? How to engage men to solve this patriarchal plague?
How to live together in peace and respect?

Merci for sharing your comments! I love reading you.

4 thoughts on “I realized I was about to be raped”