My Body belongs to me!

This story was previously published in April 2013. As the subject matter is still as current as ever, I decided to add it to my blog posts.]

That was what Amina, the Tunisian femen-iste, wrote on her naked breasts to protest against the new cultural ‘civilization’ in Tunisia, the islamisation- salafisation of the society.

Amina did not go in front of a mosque or burned an islamist flag, this kind of actions is ‘tasteless’ in Tunisia, which is, after all, an arab muslim country. Using naked breasts as political protest is not very common there. Neither is it in Europe. Until now. 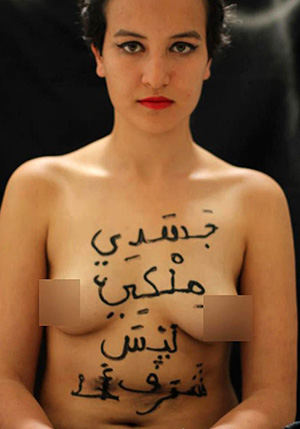 I was so furious about what happened to Amina. For me her action was as ‘radical’ as the radical action of salafists in Tunisia. Like many Tunisian women I am worried about the rise of radical Islamism in Tunisia.

Until 2010, Salafism was in Tunisia seen as an ‘exotic islamist virus’
limited to Afghanistan and Golfistan. Now it has reached Tunistan.

The salafists are also called ‘the armed wing of Ennahda’, the official islamist party sitting in the Tunisian parlement together with a secular coalition. Salafists are more and more terrorizing the civil society and especially women. And the state is watching and doing nothing.
Until one day, a young lady of 19 years was so fed up that she literally ‘went out of her clothes’ as an old Tunisian saying (‘nokhroj min hawayji’ I get out of my clothes, meaning I am fed up, I cannot take it anymore!)

I was also fed-up. I seriously thought about organizing a Femen action in Amsterdam/The Hague to protest as well. I even contacted Femen and I made an interesting interview with one of their top ladies, Miss Shevchenko.
And despite my support to Amina’s courage I decided not to do it.

My way is not putting my breasts naked, I don’t want that and I cannot do it. I also had the ‘intuitive’ confirmation about my choice when I saw my son’s face (7 years old). He looked so relieved when I told him that I won’t do ‘le truc femen’ as he calls it (the femen’s trick). My son’s reaction confirmed what I felt: my naked breasts are special and I want their glorious nudity to belong exclusively to my private intimate space.

But I respect and appreciate the fierceness of Femen as well as the courage of Amina. I agree with the concept that says the feminine body should/must be engaged in the battle nowadays, anno 2013, after almost half a century of only brain-no body feminism. Islamists are using the feminine veiled body as a political statement. That’s their right. And there are other people, women and men, who want to use the (feminine) body as well, as a non-veiled political statement. That’s also their right.

I also use my body, as a human statement because I believe there are no human rights without women’s rights. And the rights of women are nowadays seriously suffering, in Africa, in Arabia, in Asia, in Africa and in Europa because of the sexual and religious violence (without forgetting the economical one…).

The way I use my body comes from the oldest women’s ritual in the world, one of the most empowering for women as well. It’s coming, oh how ironically, from the ‘barbarian primitive Arab world’. And I would like to invite you to join us in our ‘Belly Dance Pacific’ Event on sunday 30 june around 3 pm.

All women and men are welcome. We would like the men to be in a circle around us, to support us and celebrate with us. Men are as much as women victims of the same system where they play the opressors while women are the opressed. Men can also be our allies, they are our beloved brothers, sons, fathers, friends, husbands. Guys we need your support here. Of course we can do it alone (we proved that 50 years ago), but it’s nicer and more fun to do it together today.

With love and light,